Functional Septorhinoplasty - Day 12 (or the day it came off!)

I was trying to be patient with the cast falling off, but I don't think I was successful.

I don't think 5 showers in less than a 48-hour time span is considered patient.

So yesterday I climb in the shower after laboring a bit in the backyard with an enormous amount of leaves. I had noticed the top of the cast was pulling away a bit so I pulled on it a bit to let water get down under it. Then I noticed it pulled away a little more...then a little more, and the next thing I knew I was peeling it off. YAY!

I'm in the shower so I can't see my nose, but I start feeling around. I'll admit, I got kind of scared. The bridge of my nose felt VERY narrow.

I couldn't get out of the shower fast enough.

Luckily once I looked in the mirror all was well. I can tell the tip of my nose is swollen because it isn't usually that big and I know he didn't do anything to that. There are only a few minor things that I hope resolve once the swelling goes down.. the big one is my nostrils are different shapes. I can hear ya now.. and yes, it's a big deal.

So here's a pic I took before going out to dinner. No big smile so I didn't over-exaggerate anything about it. But here ya go: 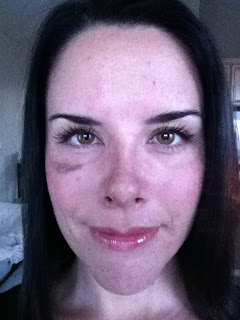