Yesterday was the big day! I had my first post-op appointment where I was going to get my cast off, sutures and splints removed. Well, I thought so anyway.

Going to the appointment I was a little nervous as I have heard of many people passing out when the long plastic splints are removed from each nostril. It doesn't help that Dr. Pahlavan's office faces the side of the building where the sun is beating down on it late morning and afternoon. Thankfully, it's been pretty cold here lately, but I was still getting a bit sweaty waiting for him to come in.

The disappointing news? The cast wasn't coming off today :( My job was to take regular showers and let the water slowly work the adhesive off - he said the cast would come off on its own in a couple of days. *sigh* I think he sensed my disappointment. Possibly because of my big frown?

Taking the sutures out was a bit painful as the part inside my left nostril was very tender for some reason. There were some tears, but I survived. When it was time for the splints to be removed, I was a sweaty mess. I realized I was holding my breath and decided that wasn't the best idea. And the light he was using was so HOT on my face. He then asked "You ate something this morning, right?"

At this point I closed my eyes, which now I am sad I did because I wanted to see how long those plastic splints were. They felt like at least 3 INCHES. Who knew your nostrils went back that far! He stuck what was probably tweezers up my nostril (again, eyes were closed, so only a guess) and grabbed what felt like my brain and pulled the first one out - complete with a big ol' pile of probably booger-y blood. Then he did the other one and suctioned both out.

I still couldn't breathe well through them. After going home and doing a few sinus rinses I can now breathe through the right side a little more, but the left side is either still pretty swollen or there is still a bunch of gunk up there I need to get out.

Anywhere, here's a pic of me tonight. First time in full make-up in a long while.. and you might catch a bit of a turtleneck - it's ugly sweater party time! 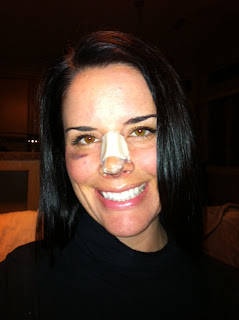