I have found myself using the "diet" word a lot lately - mainly for lack of a better word or out of laziness.. or both. The Paleo Diet just comes with that name. Sometimes I use "Paleo way of eating" but that sounds pretty lame and kind of long. No one would give a book that title. Plus "diet" sells. I have no doubt millions of people choose to start one any given day. 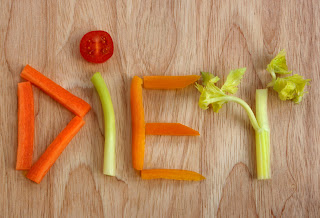 So this is my reminder: I don't think the definition most people think of was the original intention of the word. I mean, how many people do you think actually dieted in the early 19th century? I think most of them were having issues of lack of food or of specific foods than a worry of being overweight or unhealthy.

And this is where the lesson starts... according to Merriam Webster, here are the definitions of "diet":

a : food and drink regularly provided or consumed
b : habitual nourishment
c : the kind and amount of food prescribed for a person or animal for a special reason
d : a regimen of eating and drinking sparingly so as to reduce one's weight

The first two are the ones I mean when I speak of the Paleo diet. The second one is somewhere in the middle. The last one is the one that most people mean when they say "diet."

The problem? If you choose option 'd' then you are only going to change your eating habits until your goal is met. Then what happens? You slowly slide back into old eating habits and you go back to where you were. Yo-yo dieting at its finest.

This is where you decide why you are making changes in your eating and exercise patterns. Is it it just one ultimate goal you have in mind (usually lose weight), or do you want to set a habit for the rest of your life?

Call it what you want, but no matter what you call it, find a way to make it stick.
Posted by Tonja at 10:11 PM