Money has been tight lately. Yes, I know I've said that before - I just needed to say it again. Mortgage/house insurance/property taxes were due yesterday, so I have about $180 to get me through until November 11th.

My aim during this personal "eating in" challenge is to pick four recipes a week to make and then survive on leftovers and sandwiches the rest of the time. Last night I poured through some recipes I copied from a co-workers book: America's Test Kitchen "The Best Simple Recipes". Now if you aren't familiar with America's Test Kitchen, you should be. I've never made any of their recipes and had it come out bad. They test out each recipe until they find just the right ingredients to use, just the right way to cook it, etc. I also opened up a book I found on the bargain rack at a bookstore that seriously has like a million recipes in it: bon appetit "fast easy fresh".

Since Monday was already gone, I settled on 3 recipes (if I need a fourth, I have some frozen chili I made awhile ago):

Off to the grocery store, shopping list in hand. My goal was $50 so I would still have $50 for next week as well as one tank of gas and a little leftover for necessities.

Let's just say Winco saved the day. My tilapia recipe was really suppose to be halibut, but I probably saved at least $4/lb by making the switch. I threw back my Honeycrisp apples that were $2/lb in favor of the 3lb bag of Fuji's (my favorite) for $3. And thankfully Winco sells a bag of natural frozen chicken breasts (as natural as frozen ones can be, I suppose) for only $5.

Tonight's menu was tilapia (recipe below) since I felt the fish should be the first to go out of the refrigerator. I think I might even dub Tuesday's "To the Sea Tuesday!" I mean, Meatless Monday has its day, why not all the little things flappin' around in the ocean?

Here it is - complete with still-slightly-crunchy brocolli..... YUM! 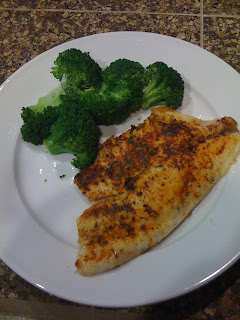 Spicy and very, very good. I think next time I would cut back on the salt a tad though. I don't think I even missed the fact that it wasn't halibut.

Heat heavy large skillet (preferably cast iron) over high heat until very hot. Add remaining 1 tablespoon oil; swirl to coat. Place fish fillets, seasoned side down, in skillet. Cook until very brown on bottom, 1 minute. Return fillets, brown side up, to baking sheet. Place in oven and bake until just opaque in center, about 8 minutes. Transfer fish to plates. Top each fish fillet with optional 1 teaspoon of butter.
Posted by Tonja at 6:25 PM

Email ThisBlogThis!Share to TwitterShare to FacebookShare to Pinterest
Labels: $, eating in, recipe