Steadily over the past few years (ok, maybe more like 5), I have started to eat out more. It's very true that when you make more, you spend more and still feel like you don't have enough. That's exactly where I am.

Now, I love cooking, but sometimes it's just easier to hop in a car and get that sushi roll you've been dreaming of or that taco salad that it would take you awhile (and quite a few ingredients) to make. Before I knew it, I was regularly eating most meals outside of my home. That's just ridiculous.
One direct correlation of this eating out is the hit to my checking account. Granted, some meals eaten out might be cheaper than buying all the ingredients to make it yourself (a la Taco Bell), but we'll get to that in a second. According to FinanceWorks (which I get through SAFE for free), I spent $2,198 in groceries in the past six months. Not bad as far as groceries for pretty much one person, but when you add in that I spent a whopping $1,898 in dining out... that's a little excessive. $4000 on food in 6 months!? That's about $160/week. For ONE PERSON!? And then there is the realization that almost 50% of the stuff I put in my mouth required someone else making it, adding a profit margin (and probably some undesirable ingredients) and selling it to me. Yuck.
When I say dining out, I not only mean sit down restaurants, faster food, but also little trips to Starbucks for a latte or that cupcake I just needed to have. Basically a lot of stuff I really didn't need and all too easy to obtain.
After coming to a point where I am financially broke (not hurting, just nothing "extra") for the first time in many, many years, I realized I needed to do something about it.
My completely original idea (or so I thought) was to not eat out for a month.
I wondered to myself if there were any articles or bloggers out there that had pondered the same idea. Welp, there was. Some chick in New York beat me to it years ago. However, she kind of blew my idea out of the water as she didn't eat out for TWO years. She has since written a book based on her blog and experience during that time and I purchased it for further inspiration. 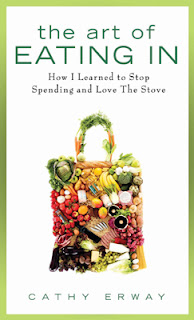 One of her obstacles was dating and just the general idea of how a lot of socialization happens around a plate at a restaurant. I can see this possibly being an issue, but it's just going to take some imagination. It won't be fun eating before I go to hang out with friends, but I'll have to visually tally the monetary savings in my head. Something's got to keep me going, right?
The other thing I hope to achieve through this process is just a healthier way of eating and perhaps some weight loss. Since giving up soda earlier in the year, I have replaced it with vanilla latte's. Even though I get them with non-fat milk and reduced amount of pumps of the syrup, I still replaced a 0 calorie drink with approximately a 160 calorie one. And on nights like tonight, where I came home from work with a headache, took a nap to sleep it off and really just wanted to go out and grab my comfort food (In-n-Out, perhaps?) to make myself feel better - I couldn't. I even read one person lost 10 pounds in just one month of not eating out! I highly doubt that will happen to me as I am thinking that person most likely started out a bit heavier than me, but it still was inspiring.


So how is this going to work? What are the "rules"? As I've thought about this over the past few days I realized there will be a lot of gray areas. I am not going to kick myself if I realize later that maybe I did "technically" screw up, but I am going to try to avoid it. For now, this is what I've come up with:


For the time being those are the only ones I can think of. PLEASE, if you can think of something I might have not thought about, TELL ME!
As for day #1 (today)? Well, let's just say I pulled a rookie move. I packed all my food today and forgot to pack breakfast - the most important meal of the day! So at work, I did purchase something ready-made, but since I was already screwing up on my first meal of this whole personal challenge, I said it must be cheap, filling and healthy. So for $2 I bought a big bowl of oatmeal with raisins and apples. As for the rest of the day, it's leftovers time.
Next on the list? Menu planning and grocery shopping. More on that soon!
Posted by Tonja at 6:57 PM

Email ThisBlogThis!Share to TwitterShare to FacebookShare to Pinterest
Labels: eating in, food, health