Ok, not really. But I did read in "The Art of Eating In" about how it really is something normal people do - at least in NYC. But then that is saying NYC-ites are normal. Ahh, I won't go there. Anyhow, they are called "freegans" which is dervived from "free" and "vegan" - even though you don't have to be vegan to be a freegan. Yes, confusing. 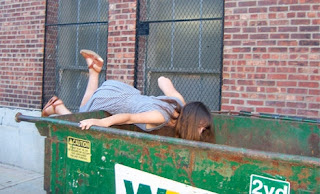 Me practicing. Just kidding :)
In the book, the author talks about a group of people who meet up and hit the dumpsters behind a regular set of restaurants and shops to open up garbage bags and pick out what they want. Before I read the chapter, I was thinking the leftovers on restaurant-goers plates and I thought "really?!" She couldn't be that crazy! Well, she isn't.

A big and very common example is a bread store. Most throw out anything that isn't sold at the end of the day and most bake more than they need in a day to keep the shelves looking full and "nice". That equals a LOT of waste that I imagine doesn't go anywhere but in the garbage. Three garbage bags full of bagels were sitting in the back of the place they went and barely a dent was made when they had taken what they wanted. Other "dumpsters" provided them with bags of those pre-washed lettuces, some barely bruised fruit and vegetables, muffins, croissants, etc.

I haven't heard of such a thing around here (oops, I was wrong) and I am hoping most places donate to food kitchens, so in the meantime my dumpster diving consists of not being shy and taking home people's leftovers.

My co-workers leftover chicken tamale pie! I had a sliver for snack this morning and was told I could take the rest home. SCORE! Dinner! One less meal I had to prepare and buy ingredients for, but it was still a home-cooked meal and I gave it a home (in my belly!) instead of it getting thrown out (they were going on vacation starting tonight).

Wow. This whole thing could possibly do more than I imagined. I eat better, save money and I help prevent a little bit of waste.
Posted by Tonja at 7:10 PM

Email ThisBlogThis!Share to TwitterShare to FacebookShare to Pinterest
Labels: eating in, waste not