So that's it. The quality or state of enduring or remaining. Yup, that's what I did with the name of my blog today. It will endure/remain forever with me until the day I die and that's just how it should be.

I got my first (and very likely) last tattoo.

Now before you all think I just came up with the name of my blog on a whim and then just a few short months after starting it, I go out and get a tattoo of the name of it... well, that is not the case.

This all started a few years ago when one of my sisters was up and moving to England with her husband and one of my nieces. I had always thought about getting a tattoo, but I was sure I needed one with specific meaning to me. How meaningful would it be to get a matching tattoo with my sister before her departure almost halfway across the world? I looked around and tossed around ideas in my head and then I came across the latin phrase "sola fide" and thought "THAT'S IT!" Well, my sister didn't really care for it and the next thing we knew she was off and the tattoo never happened.

In the next few years the idea was put in the back of my mind, but never forgotten.

I think the biggest issue was where would I get this tattoo? I'm not of the tramp stamp crowd and I didn't want it somewhere that was easily seen by just anyone. Really the only area I could think of was somewhere in the underwear area that might only be seen in a bathing suit. Being the future-oriented sort of thinker I am and knowing my desires for a family, I could only imagine a tattoo that would end up looking like one of those balloons with writing on it that you blow up way too much and the letters start stretching to an almost unrecognizable form. Not really what I was looking for.

Then my good friend Janice got a tattoo and well, I was in love. To most people the area might not seem very hidden, but when I hang out with Janice I rarely even notice her tattoo. It's the perfect spot.

So here it is. Inside of my left wrist. In all it's glory. 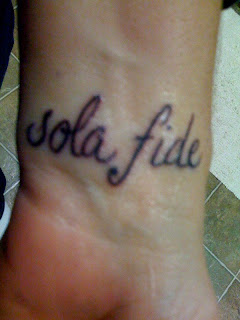 I honestly think it looks better in person, but it's like my own little baby - so of course I do.

As for what it means: "by faith alone"