On the mend, a confession and a huge project!

It's been awhile folks, hasn't it? I had every intention of catching up on this over the weekend, but then sickness kicked me in the ass starting on the car ride home from Stinson Beach. I think the cute little shack where I stuffed myself with a cheeseburger, some chili and a chocolate milkshake was the death of me. I was thinking car sickness as we all know Highway 1 can be a little, well, curvy... but I was told it was most likely a lingering food poisoning bug - and I blame that chocolate milkeshake I just had to have. 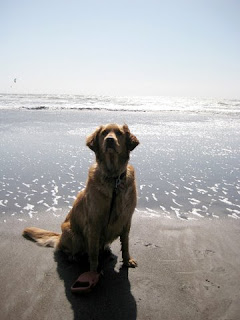 Baylie enjoying the beach
Despite being sick, Sunday was a great day of visiting the beach. There are a few things in life that bring me joy and flip flops on the beach are one of them. It could have been slightly less windy, but the company was good and the sun was out so I can't complain too much!

And now it's confession time. I haven't talked about the Wellness Challenge in awhile and that's because I've officially fallen off the wagon as of a couple of weeks ago. I know, I know. I'm officially disappointed in myself as well. But looking back I knew it was going to be a huge struggle for me. Not because I have difficulty in eating well or getting exercise, but I have major issues with keeping track of stuff. It's the same reason Weight Watchers didn't work for me - I was so concerned with my "points" that it made me so focused on food all day. God knows I already focus way too much on food - Weight Watchers just made it so near the end of the day I'd think "Oh my goodness.. I only have 5 more points... WHAT am I going to eat with only 5 more points!?!" It was horrible. The Challenge was similar to me.. I'd lose track or realize I still had a fruit and vegetable to eat and I'd cram it in at the end of the day even if I wasn't hungry.

So, yea, Wellness Challenge officially is over for me. Don't get me wrong. I think it's a GREAT idea and it has helped a lot of people. Heck, it even helped me! I still plan on applying the one cheat day a week, no eating after 8pm and daily readings into my life - but I am so thankful I don't need to keep track!

Moving on - I have a huuuuuuuuuuge project coming up in the next couple of months. My backyard! For those who know me, you know the backyard project started last summer and it was a source of a lot of stress for me. I got a lot of the big stuff done, but this spring I will be planting all the plants and configuring the drip system for those plants. It's gonna take awhile as I only have every other weekend off and the first round is going to be pulling weeds, hauling in some good dirt and preparing the soil. Any takers? :) 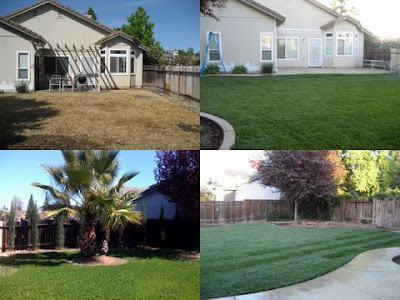 Left: Before                   Right: After
The best part of the planning for the backyard and all the plants I'll be putting in is that I have a lovely friend who planned it all out for me! I'm loving that I am going to get some of my favorites like hydrangeas and cannas, but I am going to be mixing in all kinds of edibles too. I'll have a few tomato plants, some lettuce, brocolli, a bunch of herbs (cilantro, sage, rosemary, chives, thyme, basil, etc.) and they'll all be thriving along with my flowers! I started a bunch of the edibles by seed awhile ago and they seem to all be doing well. 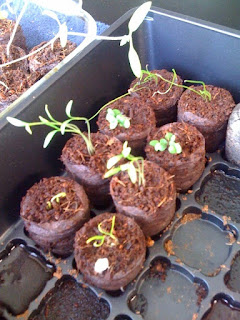 My little seedlings!
I can't wait for some home-grown caprese salad! Yum!
Posted by Tonja at 8:58 AM