Where have all the cowboys gone? 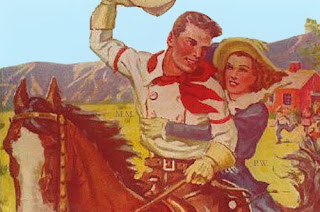 I think I first heard the song "Where have all the cowboys gone" by Paula Cole on Dawson's Creek and I am reminded about it after reading The Pioneer Woman's story about how she met her "Marlboro Man." She even had a super cute title to it called "Black Heels to Tractor Wheels." I was glued to it until I finally devoured the last bit of it Friday after work. It's the ultimate love story. It's what most woman ultimately want. Sadly, I honestly think it's disappearing before our eyes.

I am not going to blame guys solely for this - although they are ultimately at fault. If a guy happens to read this, I know I am going to get some flack for it, but hey, it's an honest opinion from a very honest woman. I do feel women have a bit to do with how men have changed in how they pursue women and treat them in relationships. I mean, we had the feminist movement where women basically slapped men upside the head for opening doors for them. "I can do it myself, why does a man need to do it for me!" Ugh. It makes me cringe.

Before you think I am someone who needs a guy to do everything for me, that's where you are very wrong. I mean, maybe I've learned to do stuff out of necessity, but that is besides the point. I can mow a lawn, change a tire, put in a sprinkler system, and most currently, I can rip apart a hall bathroom for a mini-makeover. I don't need a man to do it for me.

I do need a man to be a man though.

Yes, it involves risks. But life is about taking risks in order to win big, right?

When reading The Pioneer Woman's story, the most surprising things to her about meeting her new love was how he treated her. I'm not talking about just being nice, opening a door now and then, buying her meals, etc. I am talking about every aspect of how he handled his interest in her. She talked about her surprise at the early phone call the next morning after their first date just to tell her thank you (and then every date after that). Or how he never really asked her out after that first date, but "took charge" and said to be ready by 5pm as he was coming to pick her up (mind you they lived an hour apart and even if dinner was at his place, he often picked her up and dropped her off). She was in awe that she never once had to ask herself how he felt about her. Over time, nothing he did ever faded. He still greeted her with the tightest hug and passionate kiss on the 50th date as he had in the beginning. Everything about this guy made me think "that is what women want." At least this woman.

Some of you might be thinking "well nice guys finish last" and a bunch of other bullshit (sorry, needed it for effect). The truth is, they do finish. I mean, not every girl is going to fall for you. That's not the point. You just want one to fall for you - the right one. And if some girl thinks you are a freak for going above and beyond like that, then, well, she's just not that into you. Plain and simple. It will involve some rejection, but, damnit, take it like a man and get back up and try again.

One last thing to note: Don't be a pushover or pansy either. By doing all of the above, you are a take charge sort of man. In that case you should know how to do manly things like fix stuff and get dirty and know when you are being taken advantage of.

Ok, I am off my soapbox. I think I am just tired of the dating scene. I've met plenty of great guys, but I have yet to find that one that I am attracted to and also displays at least some of the traits above. I don't need fancy dinners out or extravagent gifts.

I simply want to hear the words "We're going out Friday. I'll pick you up at 7."

And preferably not the night before!
Posted by Tonja at 9:30 PM