It takes chocolate to bring me back to you guys. Well, chocolate and Pinterest. Darn you Pinterest. I honestly feel that website leads to the demise of everyone's healthy eating intentions. Where else can you pin "Do these 5 exercises to get abs for days" with the picture of some random model who probably doesn't even know what Pinterest is, next to a picture of a gooey concoction called Triple Decker Brownie with Caramel and Peanut Butter and Pretzels... and.. and... and.... aaaaah! For the love of slim thighs and size 6!

Anyway, this recipe is Paleo - and so that means you won't find any chemicals, no weirdly processed vegetable oils, no preservatives. Basically all that stuff that is leading to the rise in incidence of cancers, obesity, hormonal problems, infertility and a host of other problems that people ignore for the 5 minutes it takes them to inhale those boxed brownies. But it also means no wheat, or any grain flours for that matter, no dairy (although some are ok with dairy, I know I am better without - can we say ACNE!?) and no processed sugars. This entire recipe, which could probably serve AT LEAST 10 people has a total of 8 tablespoons of raw, organic and local honey in it if you don't count the chocolate I drizzled on top (which is still ONLY cocoa and some cane sugar - no soy lecithin). To remove the cane sugar, I think next time I might make my own chocolate drizzle by substituting the dark chocolate for unsweetened chocolate and some honey in the coconut oil.

For the record, I got this recipe from Primally Inspired. And yes, I found it on Pinterest. I am thankful I did though. One of the best Paleo dessert recipes I have made and I am so excited to swap out the peppermint extract for other flavors and make this all year-round - or even use the cake part to make a layer cake for a birthday party ... maybe?! The main reason I am re-typing this recipe on my page is because it was kind of confusing (to me, anyway) on their site and I did 1.5x the recipe since my pan was bigger. Oh, and I felt "brownie" should lead in the name :) 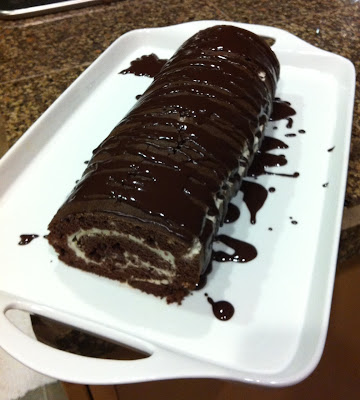 For the peppermint filling:
Coconut cream from 2 cans of full-fat coconut (leftover from what is used in brownie - see below*)
3 Tbsp honey
3 tsp vanilla
1-3 tsp peppermint extract (not oil - adjust amount to taste)
Arrowroot powder, if necessary for thickening

* The day before you are ready to make this recipe, take your two cans of FULL-FAT coconut milk and put them in the refrigerator. This will not only help it get nice and cold, but then the cream will float to the top. Then you can carefully open the cans and scoop the cream out for the filling, leaving the "water" for the brownie. If the water amount doesn't come to 1 1/2 cups, add in water, almond or coconut milk to equal 1 1/2 cups. Put the "cream" in a glass bowl and put it in the refrigerator until you are ready to prepare the filling. The colder it is, the better!

Mix the eggs, coconut oil, coconut water/milk mixture, vanilla and honey in a medium bowl. Add in coconut flour, baking soda and salt and mix very well. Pour onto the baking sheet and spread as evenly as possible. Bake for 15-20 minutes, or until a toothpick comes out clean. Remove from the oven and let cool for about 15-20 minutes. Then, using the parchment paper, carefully roll up the cake starting with the shortest side of the pan, keeping the parchment paper rolled up in it so that you can easily unroll it later. The cake might crack a little, but it'll still taste good :)

To prepare the filling, beat the coconut cream with a whisk attachment until soft peaks form. Add in the honey, vanilla and peppermint extract. The mixture will thicken up as it sits in the fridge, but if you feel it needs a little thickening, add in a tablespoon or two of arrowroot powder. 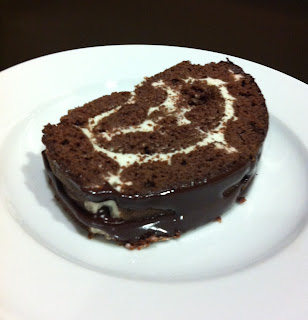 Once your brownie roll has cooled COMPLETELY, carefully unroll it and evenly spread the peppermint cream over the entire inside and carefully roll up the brownie again, this time WITHOUT the parchment paper. It's easier to use the parchment paper as you go to roll it up nice and tight.

Cover the roll with plastic wrap and let it sit at least an hour in the refrigerator to firm up.