US 50 [IN THE NORTHERN CALIFORNIA AREA]

ROAD IS CLOSED TO TRAFFIC FROM TWIN BRIDGES TO MEYERS FOR AVALANCHE CONTROL.

Not what you want to hear when you just want to get home. Thank you CalTrans.

But considering my car had about 4 inches of snow on it and it was still coming down pretty significantly, I suppose that's what happens. 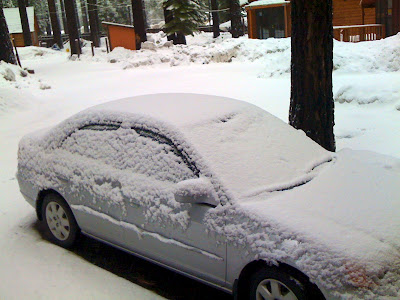 I had already resorted to the fact that I would need my chains and put them on at the cabin - a full 4 miles before I'd even need them. Proud moment there. I even double-checked with one of those chain installer dudes and he said I did a good job - as his buddy was putting on the chains for some guy in an apparently NOT 4WD (or one without mud and snow tires) SUV. I kind of wanted to smirk at him, but I didn't.

And that's probably why the universe thought it would play a mean joke on me and make me wait a full hour with no traffic moving at that very spot. 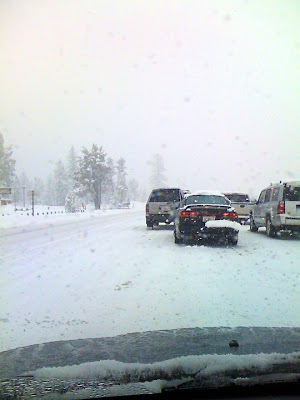 It wasn't until this point that I checked the CalTrans website again and found out traffic was being held in 4 different areas of the highway for avalanche control. I actually got ahold of a LIVE someone at CalTrans that explained I was actually still on Highway 89 and avalanche control wasn't possible on that short stretch before it turned into Highway 50 again... and it was very possible that small stretch could be closed for awhile. He couldn't say how long I'd sit there.

I cried a little. Maybe hormones, or frustration, or something. I was HUNGRY - day 3 of detox and I. WAS. OVER. IT.

So I did what any irrational person would do: I turned around, stopped and got a tri-tip sandwich and went back to the cabin to wait it out. Eventually it showed Highway 50 as completely closed to traffic.

This is where I really began to feel like the candid camera folks might pop out at any moment. Either that or someone at CalTrans had their traffic cameras just on me to see when I would go off in one direction so they'd update the road conditions in the other.

I showed that the east side of the lake was open with chain restrictions, the north part of the lake had no restrictions and I-80 was open with chain restrictions in the normal areas. Knowing that would mean taking the chains off again and then put them back on... and then off again ... I decided I would annoy all of South Lake by keeping my chains on and driving 30 mph through the casinos on clear roads. There was no way I was going to take them off THREE times.

Loaded the dog in the car and off we go on a route that would take us at least an hour longer to get home.

Almost to the casinos and something makes me check the status of Highway 50 again.

Are you KIDDING me?

It's open. See? I swear someone waited until I headed off in the other direction to let me know this.

Now I don't know about you, but the sound of cable chains on clear pavement is annoying and deafening, all at the same time. Plus I look like the total idiot who can't drive perfectly groomed streets without the safety of chains - TOURIST! Ahhhh...

I turn around.. another 10-15 minutes through town... the rumble of the chains grating on my last nerve...

Thank goodness the weather had let up, the sun was peeking out a bit and the rest of the ride home was very smooth with very little traffic. 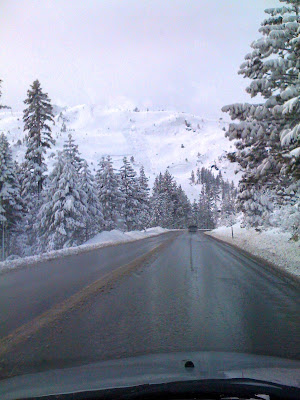 I even felt a sense of empowerment again when I got out to take my chains off and did it in less time than the car behind me with 3 people all looking at their passenger front wheel like they had never seen one before.

Who cares, I am home and on real food again.
Posted by Tonja at 7:29 PM