All things are possible - or how I made the third time a charm...

My third attempt, but I finally showed the 1/2 marathon who was boss.

It was 7 years ago that I decided I was going to try the Shamrock'n half marathon during its inaugural race and my brain is failing me how far I actually got. I think it was 8 miles, but lately I keep thinking it was only 6 miles.

I decided my body clearly was not built to run long distances.

Then I got the itch to try again and this time I was going to do everything possible to make sure it happened. I got weekly massages, used my foam roller to beat up my IT band (and make me cry - you try it!), and decided I was ok with walking a portion of it. I had ran 4-5 miles with very little issues, so in the back of my head I told myself I could at least run 2/3rds to 3/4ths of the distance and walk the rest.

Training progressed, I ran 3 times a week and around week 6 or 7 of training, my knees were all but yelling at me that I was treading on thin ice. At this point I honestly just ran once a week - my long runs. I was afraid this wouldn't be enough, but my knees needed the break.

Then I get sick - the achey, chest burning, lethargic kind - two weeks prior to the race. I did an 8 mile run, got sick, a week and a half later I did a 4 mile run and hoped that was enough.

Enter race day: scared for my knees, nervous I'd have to walk more than I anticipated and take forever to finish, but thankful for perfect weather (for me - clouds, 50-60 degree weather, no wind or rain). 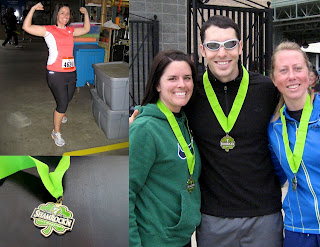 My knees held up until a bit later than usual.. somewhere between mile 6 and 7 I thought "oh no", but I kept going. Miles 7-10 I did my normal walking only through the aid stations and stopping to stretch. At miles 11 and 12 I stopped again to stretch.

Almost there. Enter charlie horses and cramping in my calves. In fact, at this point my calves and feet started hurting MORE than my knees. Only a mile to go.

I could see the Tower Bridge and I knew Raley Field (the finish) was just on the other side. I picked up my speed - I wanted this over fast no matter how bad it hurt.

A major cramp just about took me down a few hundred feet from the finish.

I even managed up the entire flight of stairs to get out of the field and up to the concession area.

Email ThisBlogThis!Share to TwitterShare to FacebookShare to Pinterest
Labels: runnin'