I've got the need for no-knead (bread, that is)

My "eating in" muse has been that girl from New York and she has inspired me again.

This time it's with one of her ventures into cooking contests. Nope, not going to do that (just yet), but I am going to make some bread using a recipe that had to be adapted into a personal creation for a cooking contest she entered. Yum - who doesn't love freshly baked bread?

Apparently the concept of no-knead bread came from a baker in New York and so in 2006 the New York times published his recipe. It takes just about as long as regular bread, but you barely touch the dough and you cook it in a cast iron dutch oven in the oven.

For my first attempt, I decided not to mess with the recipe much. The only change I made was replacing one cup of white flour with whole wheat flour. At some point I'll try to make it all whole wheat and maybe add in some herbs, but for now we're going to keep it simple.

I'm bummed I forgot to take a picture of the end of step one after it had set for 24 hours (I've been told it can even sit up to two days - or maybe more??). Even without the picture, trust me, the top was dotted with bubbles like the recipe said it should be. Here's what it looked like after I folded it over a couple of times: 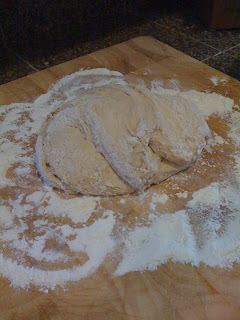 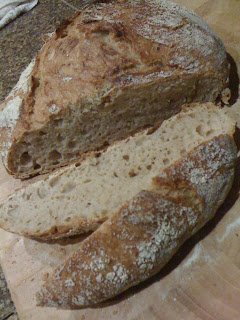 But I waited until this stage to actually taste. Spread with butter, this bread was heavenly. It was so crispy crunchy on the outside and chewy in the middle. Definitely a texture I never thought I could get at home. It didn't quite rise as much as I thought it would (or think it should have), but I think a slightly warmer area for it to hang out in would have helped.

Still VERY good though and I cannot wait to try it again.

It paired well with dinner - garlic shrimp with basil: 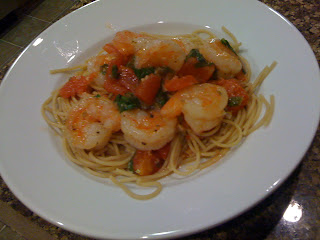 This meal made me realize - I could have easily paid $20 with tip out at an italian restaurant for this meal and I probably spent MAYBE $5-6 a serving?

This saving money thing is fun!

Pat shrimp dry and pre-heat skilled over medium-high heat with 1 tbsp olive oil until very hot. Cook shrimp for 1 minute on each side. Remove shrimp from skillet.

Add 1 tbsp oil, 1/2 tsp pepper to skillet and cook until fragrant, about 30 seconds. Stir in white wine, tomatoes and simmer for 5 minutes until reduced.

Remove skillet from heat and add in basil, butter, capers and lemon juice. Add the shrimp back into the skillet and cover until shrimp is heated through, about 5 minutes.

Serve over rice or pasta.
Posted by Tonja at 8:12 PM

Email ThisBlogThis!Share to TwitterShare to FacebookShare to Pinterest
Labels: eating in, recipe