I was quiet this week, I know. It came down to just not wanting to sit down and write at the end of the day, so I didn't.

To summarize, I went grocery shopping with a whopping $25.03 in my checking account and another $1.10 or so in my wallet (in change). I can't recall if I have ever had to use a calculator while shopping before, but I was slightly embarrassed. Yes, I know there is no reason to be and that frugality and budgeting is a good thing, but I just felt silly weighing my fruit and vegetables. By the way, let's be thankful to scales that worked in my favor (more on that in a second).

Just as I am wrapping up my shopping, I do one more tally on my spending and realize I will be short by about a dollar. There I am, in the middle of the bakery fishing all the change out of my purse to see how much I can come up with. And it is there I wonder, why do I still have euros in my wallet!? That trip was a year ago!

Now I have $1.10 in change and from my calculations (and weighings of fruits and veggies), I am thinking I'll need approximately $26.10. I am usually one of those people that starts swiping the debit card before the cashier has finished ringing things up, but not this time. I couldn't risk the $20 fee SAFE would charge me to pay that debit (because I *did* authorize them to do that.. thinking I should change that).

Thankfully the total is $23.95 ... I can only guess my fruits/veggies weighed more on the produce department scales *phew*

Wow, I fed myself pretty much the entire week with $23.95 and what I already have in  my house. Amazing.

One of the recipes I made was Super Spicy Chili Mac from the America's Test Kitchen book. Not only was it super spicy (I replaced one can of Ro-Tel mild with hot), but it was super good. I think I ate it for a total of 5 meals. For that reason, I may not make it again for awhile, but I WILL make it again! 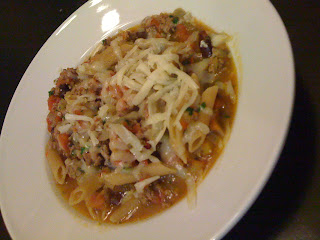 Super Spicy Chili Mac
Later in the week I did grocery shopping to make a big breakfast on Saturday morning and buy the ingredients for green bean casserole to bring to a dinner party - but my grand total for the week was still only $65.48! Again, AT LEAST another $100 saved this week!
Total savings to-date: $255.00
(estimate - based on $190/week food spending in prior 6 months)
This week was not without dilemmas though. Although the only eating "out" I've done the past two weeks has been at the expense of others, there are a few times in the past week where the "food" was bought "out", but was brought to me and was free and I ate it. Who can say no to cupcakes for Radiology Week?
It wasn't until just today I realized the gray area and for the rest of the month I am not allowed to eat anything that was once several ingredients and is now one food item that is ready to eat and normally is eaten in that state. I think I just confused myself - I hope you got it. Again, canned soup is the exception - which is funny because I haven't even resorted to that yet.
Bye bye cupcakes. *sigh*
If not for the cupcakes at work, the completely legal cookies I made at home and the two dinners I was invited to I might have seen results on the scale again - but we won't go there.
Here's to a new week. I am feeling a bit under the weather and had to stop my workout in the middle today - so menu planning and the one big grocery store trip hasn't happened yet. I managed to get to Raley's on my lunch today to buy some stuff I can't get at Winco, so I think I'll survive for a couple of days...
.... but PB&J is gonna get old.
Posted by Tonja at 6:28 PM

Email ThisBlogThis!Share to TwitterShare to FacebookShare to Pinterest
Labels: eating in, recipe