It's nearing the end of day #1 on my detox and I think I'd call it a success, although my taste buds are rebelling. I don't think I've shared with y'all that my sense of smell is by far my best sense. Sight was fixed by Lasik, hearing is just standard, sense of touch... well, never thought about it, but I can smell anything a mile away.

I always tell a story about a day at work where we were told that pizza was being delivered to us for lunch. That day I was working in CT, which is close to the entrance the pizza guy would use, but a few hundred feet from the break room (which does have a door that stays closed.. keep that in mind). Also, you should know that the pizza would travel past the CT department no closer than 10 feet from me, but also through at least one closed door and another doorway - so it's not like we were passing each other in the hall. Well, it's before noon, but I smell pizza. Curious as to how I can smell it since it's not even suppose to be here yet, I take the few hundred feet walk to the breakroom, open the door and the pizza guy is just then taking the pizza out of his little warming bags. Coincidence? Possibly. But don't under-estimate the power of my sniffer.

Where am I going with this? Well, my tastebuds were tempted all day. I think everyone in my department brought amazing leftovers for lunch to heat up in the microwave. Even the Starbucks coffee smell that lingered on me after I went there for an iced green tea was making me drool a bit (and I don't even care much for coffee!). The topper was taking Baylie to Petsmart tonight for her first day of school. In-n-Out is in the same parking lot and I am sure the smell has never been that strong any other time I've parked near Petsmart.

It's like all the world is out to get me.

But I made it. Oatmeal cooked in plain soy milk for lunch. Vegetable juice blend, some of the broth I made (threw half of it out as my stomach wasn't too keen on it) and green tea during the day. Dinner had to be cooked fast so we could make it to school on time, so all I had was a chicken breast (the beans were taking too long!). I had to be creative with the chicken to make it taste decent and I didn't do too bad. I mean, I wouldn't order it in a restaurant and I certainly would not cook it exactly like this on a non-detox day, but it did the trick. Plus, I was hungry and probably would have eaten Spam, gooey slimey fatty stuff included.

I basically just chopped up shallots, garlic and cilantro really fine and put it on top of the chicken to steam a bit in the pan. When one side of the chicken was done, I flipped it over and the mixture browned while the chicken cooked. Not bad. Not bad at all. 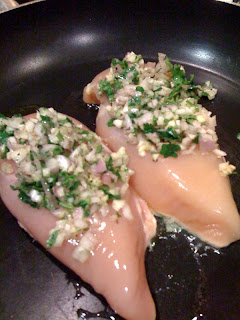 I would have taken a more appetizing picture after it was done cooking, but I ate it that fast and the other half is already packed away for lunch tomorrow - I just don't feel like figuring out how to take a nice picture of it while in a Gladware container.
For all those wondering, I really never got too hungry. I mean, my stomach growled a few times (I growled back) and I felt a tinge of hunger, but no starving feeling. That was the biggest thing I was worried about and it turned out to be the least of my issues!
Now it's time to go smell the entire neighborhood's yummy dinners while I take Baylie for a walk.. actually, it's 9pm. Perhaps I'll smell dessert baking instead *sigh*
Posted by Tonja at 8:59 PM

Email ThisBlogThis!Share to TwitterShare to FacebookShare to Pinterest
Labels: detox