My first job was slinging pizza dough and sauce at Round Table Pizza when I turned 16 in 1993. My first paycheck was probably all of $125, but I spent probably half of that to adopt a 6 month old lab mix who I named Shadow. 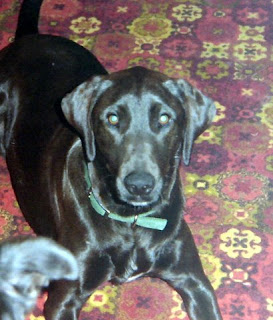 (side note: yes, that carpet will forever be immortalized in this picture... it lasted way too long in our family room!)

He never acted like the smartest dog, but he was. I regret that back then I didn't spend as much time with him as I should have. He moved out with me in 1996, but I returned him to live with my mom a year or so later when I had to move somewhere that wouldn't accept dogs. He lived with his buddy Velvet (another lab mix) until she passed away. By this time he was nearly blind and probably totally deaf. You could walk up behind him and touch him and he would jump because he never even heard you coming.

By 2007 he was 13 years old, but would still act like a 2 year old if you got the tennis ball out. In September of that year I had to do one of the most, if not the most difficult thing to-date in my life - I decided to have him put to sleep. His body was giving away, he'd sleep most of the day and although I am not sure he was completely ready to go, it just needed to be done. I'll miss the guy. Maybe he was a cross between Marmaduke and Odie like my mom said, but you had to love him.

The past few years have seen a few dogs come in and out of my life in an attempt to replace Shadow. It took a few tries, but I'm positive Baylie is the one. Nothing beats coming home to a face like this. And nothing beats this face being super excited you bought her a new rubber chicken toy that squeaks! 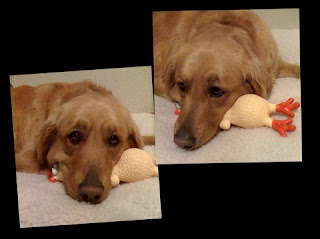 "I've seen a look in a dogs eyes, a quickly vanishing look of amazed contempt, and I am convinced that basically dogs think humans are nuts." - John Steinbeck
Posted by Tonja at 6:33 PM

Email ThisBlogThis!Share to TwitterShare to FacebookShare to Pinterest
Labels: baylie