The other guilty pleasure...

If there is one great thing about being single and childless, it's that all the money I earn is MINE. I've been blessed with a great job and someday cannot wait to share it all with someone else (and a bunch of mini someone else's), but for now I do what I want. If that's the one thing I can love about being single, I better just enjoy every minute of it, right? 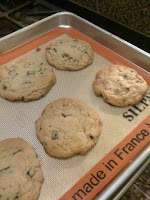 But before I divulge my latest I-could-only-buy-this-while-my-tax-return-says-single-and-1 purchase, I have to make sure you know my first guilty pleasure. That kind of makes it sound like it's just one thing and you'd be very, very wrong if you thought it was. Guilty pleasure #1 is all about pastries/baked items. You had to know that. I am the Miss Field chocolate chip cookie making queen. I love nothing better than cute little triangle shaped blueberry scones. My willpower melts at the sight of that pink doughnut box. And fresh baked brownies? Weak knees.

So, the other guilty pleasure? The one that could very well take the place of the first one on my quest to being healthier? It would have to be an article of clothing that just makes you feel FAN-tastic. It could be as simple as a great pair of earrings, but it could also be something you've been thinking about for months because, well, it just isn't cheap enough to buy on a whim.

This is how the story started:

I was on my quest for a cute pair of boots. I've always wanted cowboy boots, but I'm just not country enough to pull it off without looking like a wanna-be. I started looking more towards boots that I could could be classified more as English riding boots. My zappos.com search led me to a brand called Frye. People could not stop gushing about these boots in their reviews. Just based on what people were saying, I almost slapped the plastic down on my laptop and just bought them. However, as much as my dad and step-mom think I just throw money away, I'm actually quite frugal. I won't buy them unless I know they are worth it and I can't find the exact same thing for cheaper (Nevermind they think it's the exact same thing... ).

Fast forward a couple of months.

I'm doing mammograms at work and I notice a women's shoes. Yes, for the guys reading this, I notice her shoes! She doesn't even have her pants tucked into the boots, I just see the tips of them and I say "Cute shoes!" and she starts gushing about these things. You guessed it, they're Frye's. She goes on and on about how she's a teacher and on her feet all days and these are so comfortable, how everywhere she wears them she gets compliments on them... and I politely tell her I hate her because she has me that much closer to plopping down the change on a pair of these. Well, I didn't quite say it that way, but I wanted to.

A few weeks later it's the "out of sight, out of mind" thing. But I was far from forgetting about them. 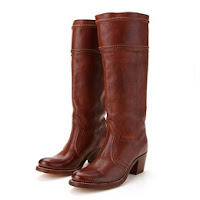 Then it happened. A casual invitation from a friend to join her at the mall to shop turned dangerous. I didn't even plan to buy anything, I was just going for something to do and the company. In fact, I couldn't remember the last time I had gone to the mall or even bought an article of clothing for myself. So there I was, at Roseville Galleria, and the friend was on the hunt for shoes. "Oh, let's look in here" she says. "Ok" I respond. I casually look around and notice these cute boots on the first display. The salesgirl notices me pick them up and looking back she probably thinks "Cha-Ching commission payout!" and probably ran over to me - but I didn't notice - I was glued to the boots. She said "These are the best boots ever!" and at this point I go something like "uhhh oooh myyy ... these are..... FRYE'S!?!?" I look at my friend a little nervous. I hadn't actually tried a pair on. I was afraid to. It's like when I knew if I ever tried Nutella I would fall in love, so I resisted for years .. and then in a moment of weakness the rest is history... yup. Just. Like. That.

I'll spare you the details, but between the salesgirl gushing some more about how much she has wanted a pair but doesn't have the money for them right now and the OTHER salesgirl wearing the same exact pair I was trying on (that her boyfriend just bought for her), well... wrap those babies up. We're going home.

Now, this is where you might think it gets a little cheesy, but as I am leaving the store with my purchase in hand, the other proud owner of a pair of Frye's says "Happy Frye-day!"