After 2 months of waiting, the day of surgery was finally here. I was both excited and nervous. I knew I was in extremely capable hands, but really didn't know what to expect at all. I was happy to have my surgery scheduled at Kaiser's newest ambulatory surgery center - kind of like the country clubs of surgery centers for sure! 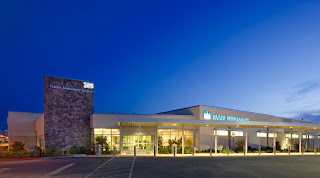 I arrived at my schedule time of 8am with my sister Jen. Immediately I was sent over to be checked in while my sister hung out with the volunteer giving them all sorts of information like her phone #, what she was wearing, if she planned on waiting or was going somewhere else. They even gave her a map of the area with all the stores and eateries! It's kind of a nice set-up because a super nice movie theater is right next door and the new Whole Foods was just a little further away.. must be nice!

I got called back at about 830am and changed into a gown and had all my vitals taken and then my sister was allowed to come back while they started my IV, the anesthesiologist team (yes, team!) questioned me and Dr. Pahlavan came by.

First funny thing: the IV start. I start IV's all the time on adults and kids. On adults, we just start the IV already. I am sure it doesn't feel fantastic, but it's quick so you just get to it and get it done. Even with all the IV's I start, I don't look when someone starts one on me. I just never have, so why start now? Well, I thought she had started it but then I looked and she was pulling it out. What the heck? Turns out she was just giving me some lidocaine to numb the spot before she started the IV! Hilarious! I definitely didn't the IV poke, but wasn't sure it was necessary since the numbing poke did sting :)

Second funny: I asked Dr. Pahlavan one more time to please TRY and keep my nose looking the same and to pretend that he was doing this surgery on his wife. He said "I'll pretend I am doing it on one of my daughters" as the anesthesiologist chimed in "Yea, you don't want him pretending you're his wife right now! Daughter is better!" I think it was a joke because we all started laughing.. but it was good to know everyone had a sense of humor.

Shortly after they asked me to say goodbye to my sister and that they were going to give me some Versed. I knew this stuff! It would help relieve any anxiety and also cause amnesia from anything that was happening prior to putting me completely out. Wow. Talk about hardcore stuff.... they gave it to me, I immediately felt loopy and the last thing I remember was being pushed out of the pre-op area.

Disclaimer: I blame any and all typos (which I know there are a lot!) on the meds :)