There has been a lot going in lately in my life - stuff like attempting 5-6 days a week of working out, all the preparations for my sister's wedding and then the next 3 months have THREE vacations thrown into them. Wow!

So what brings me back? Good food, of course. Did you really expect anything else?

Tonight I made one of the most fabulous dinners ever. It definitely ranks up there with my chili verde, tortilla soup and asian marinaded flank steak. What makes this multi-party meal (my definition: a separate meat, carb and veggie) special is I liked every single part!

So here it is - carne asada marinaded flank steak, mexican rice (not to be confused with spanish rice) and grilled zucchini: 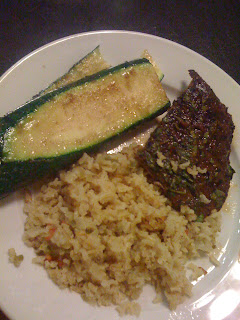 My goal with the rice was to get something similar to Dos Coyote's rice. I came close, but I think if I had added corn I might have hit the jackpot.
For the record, be happy you got a picture of the plate. I was so hungry by the time it got to that point that I was just about to dig in and realized I should snap a quick picture.
I should also note that all recipes come from AllRecipes.com. Love that website.
Now excuse me while I go waddle to bed.
Carne Asada Marinade
3/4 cup orange juice
1/2 cup lemon juice
1/3 cup lime juice
4 cloves garlic, minced
1/2 cup soy sauce (I suggest low sodium as I used regular and it was really salty)
1 tsp. finely chopped canned chipotle pepper
1 tbsp. chili powder
1 tbsp. cumin
1 tbsp. paprika
1 tsp. oregano
1 tbsp. black pepper
1 bunch fresh cilantro, chopped
1/2 cup olive oil
3 lbs flank steak
Combine all ingredients (except steak) and whisk well. Reserve 1 cup for later. Pound flank steak to even thickness and poke steak all over with fork. Put steak in a gallon ziploc bag with marinade and let sit in the refrigerator for a minimum of 24 hours.
Remove steak from bag and grill over medium-high heat until desired doneness. Once done, remove from heat, slice against the grain and pour reserved 1 cup of marinade over the meat and serve immediately.
Mexican Rice
1 cup rice (I used brown rice, so decrease broth if you are using white)
1 tbsp oil
2 cups chicken broth
1/2 onion, finely chopped
1/2 green bell pepper, finely chopped
1 jalapeno, chopped
1 tomato, seeded and chopped
salt and pepper to taste
1/2 tsp cumin
1/2 cup cilantro, chopped (I didn't have any leftover, still tasted good)
1 clove garlic, minced.
Cook the rice over medium heat in the oil. Add rice and remaining ingredients into a rice cooker and cook until done.
Zucchini
Slice zucchini's length-wise, brush with an olive oil, garlic powder, balsamic vinegar and sea salt mixture. Grill until done!
Posted by Tonja at 9:35 PM