Yesterday's events solidified my theory that owning and loving pets is the single best thing you can do to prepare yourself in every way to have children.

I don't exactly remember the year, but sometime around 2002 my cat, Tux, got very sick. He started vomiting all the time, wasn't eating or drinking and eventually became very lethargic. I took him into the vet and learned lesson #1 of parenting: you're gonna shell out some money. 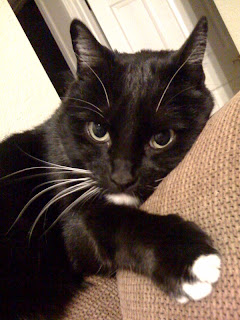 Tux - healthy and happy
They weren't sure what was wrong with him, but thought it possibly was something stuck in his system. They gave me a big bag of saline to take home and that's where I learned lesson #2: you're going to have to do a lot of tough things you don't want to do, but you have to. Twice a day I would stick a large needle under the loose skin near the back of his neck and let the saline flow in. This was to keep him hydrated until he eventually got over whatever was wrong with him.
Fast forward a day and a half and there was no improvement - possibly he was even worse. In tears I gathered him up in the car and drove with a friend at 11:30pm on a weeknight to an emergency vet where they hooked him up on IV fluids and kept him over night.
Lesson #3: there is nothing more painful when watching your "kid" hurting and having to leave them.
I cried the whole way home, didn't sleep that night, visited him during the day the next day and came back to pick him up at 11:30pm the next night.
Lesson #4: you will lose sleep, you will feel weary, but you must go on with life.
I was exhausted. No sleep. Getting up early to take him to the regular vet's office the next day and after shelling out almost $1200 for various tests, care, etc., he finally must have passed whatever it is was stuck in him and he started eating. It was two weeks of misery.
Two weeks of training.
And this brings me to yesterday. The whole series of events leading up to another mom-in-training exercise is just weird, but that will be the subject for my next post.

The short of it (but still long): Baylie ate rat poisoning and I figured out she ate it before she had any symptoms. Turns out it was the worst kind of rat poisoning she can eat as there is no antidote - only attempting to control the symptoms which include brain swelling, seizures, paralysis.. the list goes on. It basically attacks the central nervous system and eventually kills whatever eats it. Usually rats, but it was in Baylie.

I knew to be worried, but working in the medical field I also know not to completely freak out. I gathered Baylie in the car and off we went to Loomis Basin Veterinary Clinic - thank God for a 24 hour veterinary place being so close.

Once there I let them take her to the back to induce vomiting and after awhile they called me in so the doctor could speak to me. My eyes welled up in tears as she explained this is a very bad poisoning for her to have eaten and how they treat it really aggressively and they will definitely be keeping her for 2-3 days.

I couldn't believe it. I felt like I had let Baylie down.

Lesson #5: we will let our kids down, we won't always be perfect.

The "if only's" started flowing. I was reassured I wasn't a bad person and that it happens.

I shelled over a chunk of change as a deposit (see lesson #1) and was sent home.

To say I cried is an understatement. It brought back feelings of when I put my last pup Shadow to sleep. It hurt. My head hurt, my jaw hurt, my heart hurt. Here I had worked so hard to give Baylie everything and after only 5 months of having her, I possibly killed her.

My only thought was prayer. The power of prayer is real and I solicited it from anyone and everyone.

Luckily the news today has been good- God answers prayers. Baylie is showing no symptoms of the poison and when I went to visit her she seemed to be walking fine. She looked a bit worn out, but that's to be expected - you would be too if someone was shoving a nasty charcoal mixture down your throat every hour! 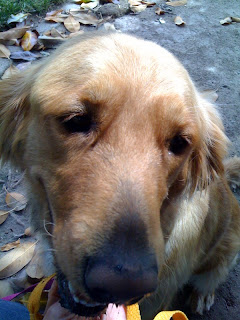 Baylie looking very worn out during
my visit with her
I am looking forward to her coming home tomorrow, even if I am leaving her and going on my mini-vacation to Carmel as planned. I went back and forth about still going, but she will be staying with my sisters and won't be left alone so they can monitor her for any signs of problems.

Plus, now more than ever, I need to get away. I am worn out.